The well-known words “if you are not successful at first, try and try again” are going to be proved with the new and new start of the online gambling lottery with a crook. The latest news being known as to the online lottery GeoLotto is that it has been redesigned for The United Kingdom market. Geonomics, the specialist in a lotto game based on location, has initiated its main product GeoLotto.com again after it was rebranded the previous year from the game producer Roboreus to Geonomics as a step to promote the company’s offerings to the wider audience. 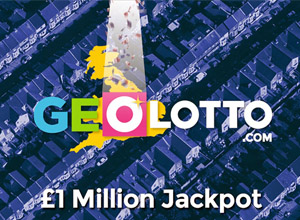 With GeoLotto the players will be able to demand a piece of the country, a piece of a football field, a piece of your back yard or a well-known landmark. Each piece of the real estate that you demand appears in the lure, with the opportunity to gain money in range from £15 up to £1 Million as a jackpot. Apart from rebranding, the company has expanded its operation with some extra second-chance opportunity. It is called a Treasure hunting and includes the instant game of treasure hunting which was developed for the lotto market of the US.

With the help of Google Maps interface GeoLotto divided the United Kingdom into some squares and the gamblers can choose and purchase, which differs this lottery game from other kinds of lotteries with the conventional choice of numbers.

The co-founder and sales director at Geonomics, Henry Oaks, remarked, “This step is an important marker in our intention to offer a new, well-tested and gripping location-based lottery game that we are sure the gamers will really enjoy gambling.”

In Eastern Canada a version of the GeoLotto game entitled GeoSweep was already initiated by the Atlantic Lottery Corporation which persuaded the New Brunswick and P.E.I. governments to allow it to invest $8, 000,000 in the firm and spent $2, 000,000 in advertisements which could not attract the citizens of Atlantic Canada to join the lottery. “If you are not successful at first, try and try again. Then leave. You don’t have to be a damn fool about it”- this is the saying of the well-known American comedy actor W.C. Fields.